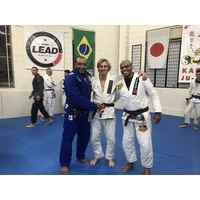 Josh is a seasoned grappler having championed many regional, state and nationally competitions over 12 years in Kickboxing, Wrestling, Brazilian Jiu Jitsu, Judo and Ninja warrior.

Attributing his focus to a life changing accident he had when he was just 18. Josh altered his life to chase the dream of becoming the youngest black belt in Australia a feat he achieved at age of 23.

Travelling internationally to Brazil, America and Japan, Josh has had the pleasure of learning various techniques and skills acquired from various high ranking practitioners of BJJ, Judo and Wrestling

"I was 18 when I found myself in hospital one day, It was a surreal feeling, I thought it must have been a bad dream, fear struck over my body, I felt tubes, needles, cords coming out from everywhere. I remember thinking why can't I move my legs, the nurses rushed over yelling "he's awake" I asked what's going on, why am I here , why can't I move my body, whats happening to me? with panic in my voice. They told me I can't move my body because I've been in a coma for 3 weeks, I'm lucky to be alive and I'll need to stay here until I recover. Later I learned the stress from my home life combined with an accident training Brazilian jiu jitsu was the cause for my visit to St George Hospital, Sydney. I spent the next year in a vegetative state in and out of hospital struggling with medical complications combined with the copious amounts of medications I was prescribed. This provided me with a choice to make, was I going to live the rest of my life as a vegetable, living in my bed, in and out of hospital feeling sorry for myself and blaming the world for my problems, or was I going to take control of my situation and ultimately change the course of my life".

"I implemented my own progressive fitness and training program to get back to training in martial arts and win the Australasian BJJ titles".

"I achieved that goal in 2010, was the youngest black belt in Australia 2015, was drafted to the Australian Olympic program for judo and started a career as a professional tree surgeon in 2016 climbing trees 50m in height".

Some of Josh's Amazing Achievements on the mats and off....